The world around you is not what it seems.

Or at lease that's how Ingress is presented to the newcommers. The game was created by Google which is by itself quite interesting, and like many Google products, it's been released under an invite-only beta program. It's an ARG where you have to (or at least you're supposed to) actually go to places to perform game actions. Yes, it's a bit like geocaching.

Being a Google closed beta, the game has attracted the attention of a lot of geeks that have been using it as an excuse to go outside and walk. A lot.

There are many artifacts in the game, but for now let's focus on portals and resonators. Portals are what you want to take over. Resonators are what you place around a portal (up to 8 per portal, one per octant) to make it yours. Conquering a portal usually means destroying the resonators.

Resonators are destroyed by consuming another artifact called a XMP Burster, which come in levels, ranging from 1 to 8. Here's a nice table on damage and range. The amount of damage inflicted by firing a burster varies with the distance to the in-range resonators. Initial research shows a linear decrease of damage with distance, but many say defend that the decrease is rather quadratic or even that it has to do with where you're [pointing at].

Because of this, it's been common knowledge that you should fire the burster while standing on top of the resonator you're trying to fry. Reddit user sikosmurf disagrees with the trend and suggested that the most effective way to take down all resonators on a portal would be to stand in the middle. I decided to do the math myself.

Let's start by assuming an optimal configuration (all 8 resonators at 35 meters from the portal).

With a linear decrease, the optimal position would effectively be at the center of the portal, for that would be where the sum of the damage over all resonators would be the highest. 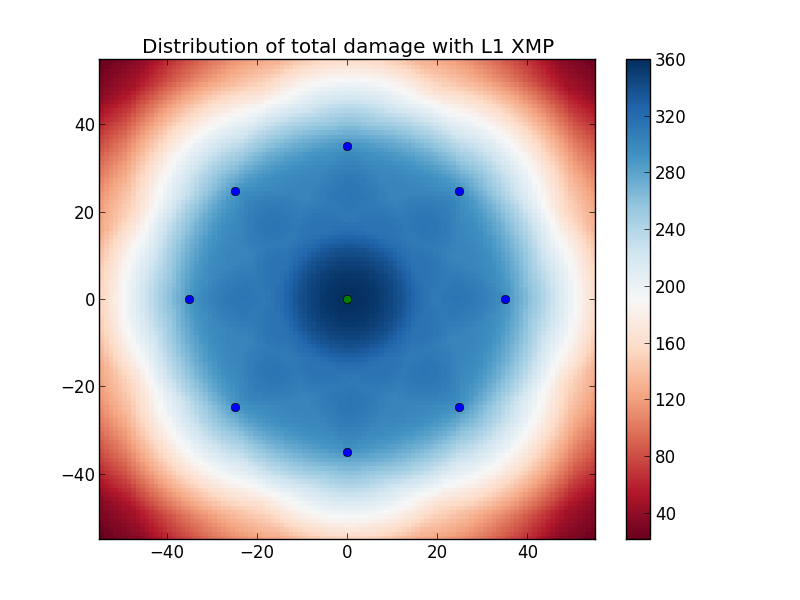 If we use a quadratic decrease, the picture changes immediately 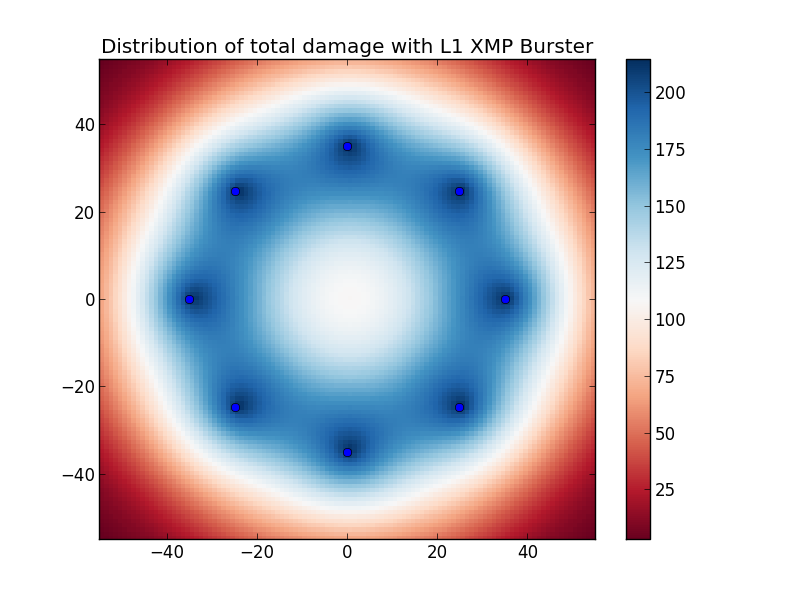 However, using a L2 XMP will yield an attack range that makes centering the attack the best option again, even considering the quadratic decay. 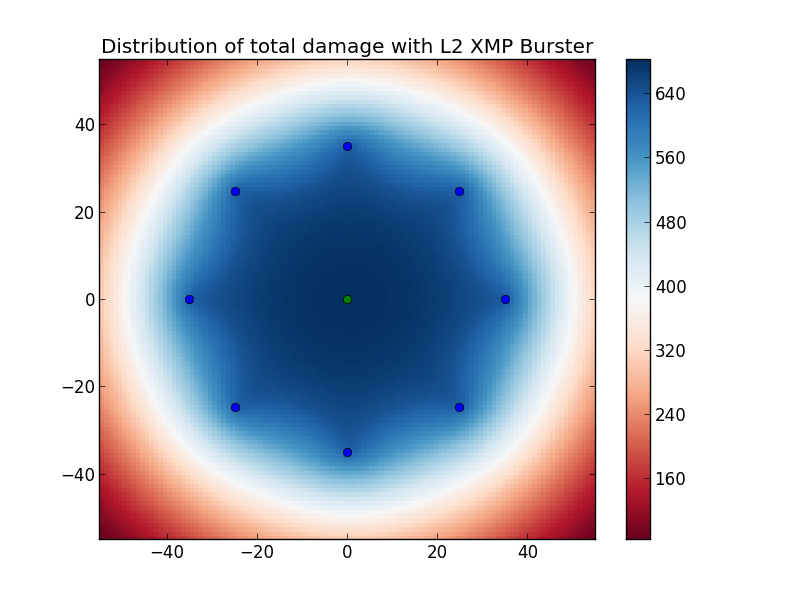 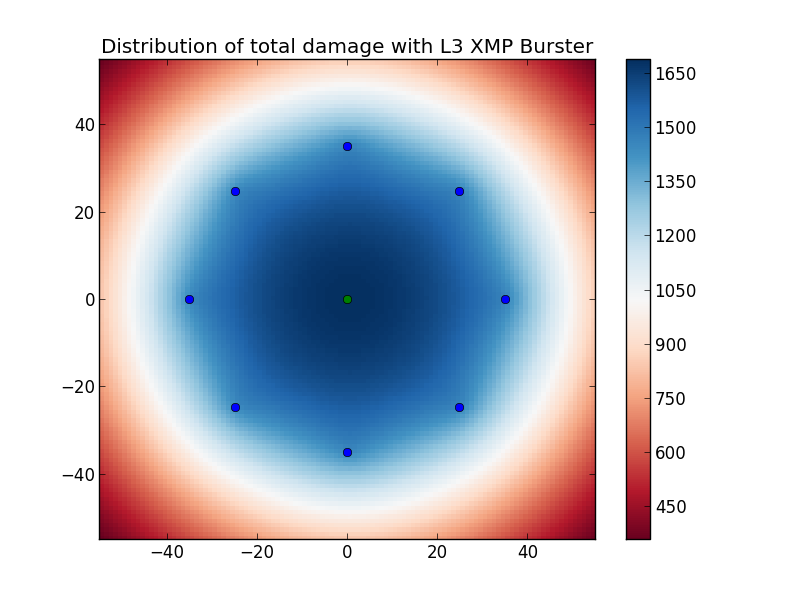 What if the resonators aren't placed as far from the portal center as they could? In that case, it might make sense to fire even L1 bursters from the portal's center. 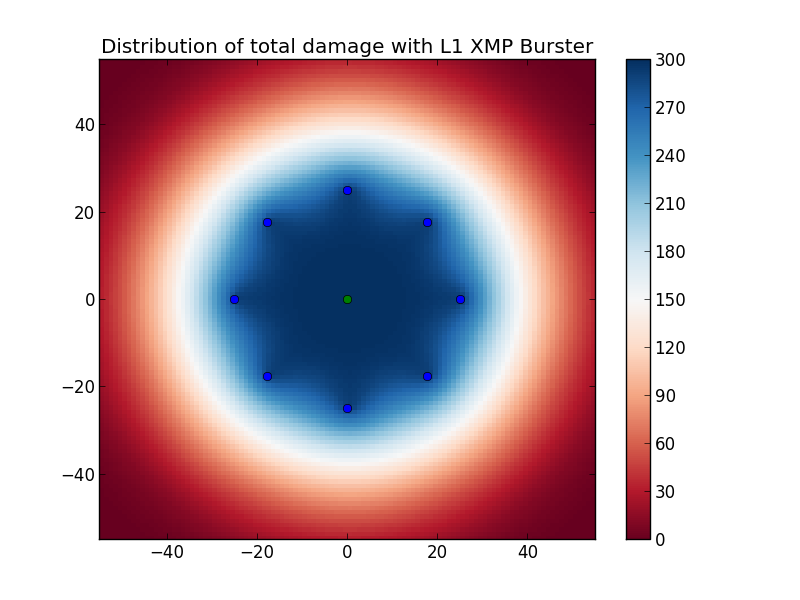 L1 against resonators placed in a 25m radius (instead of 35m) 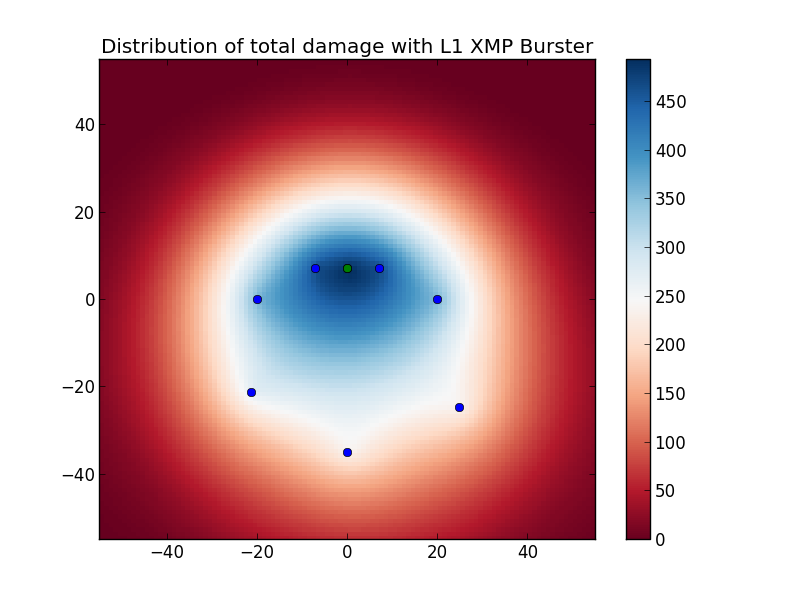 L1 against resonators placed at several distances from the portal, the closest ones at 7m.

These graphs were made using python and matplotlib. You can find the source code here. Any improvement suggestions are welcome.